I use my old tablet to play with different releases, ive had ubuntu, kali, fedora and pureos. ubuntu tended to be slow so i have lubuntu installed currently. besides some other screen issues like no touch keyboard for boot up anymore and a misaligned orienatation for the touch, my issue id like to resolve is VLC in particular seems to have issues with scale. the window and fonts dont match system, and the windows for option screens are so big and cant be resized. often the bottom portion of the screen is unusable, and no scroll bar is available to see below. i use it mostly for monitoring stream cameras used for security monitoring mostly. 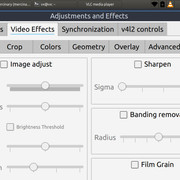 Given Lubuntu 21.04 is now in it’s last week of support, I’d release-upgrade asap or if it’s a new install (you mention installing but gave no timeline though your wording implies to me it’s a recent install) I’d re-install a release that has will still be supported next Friday (21 January 2022).

If this is a new install; I’d suggest starting again with a release that will still be supported on Friday 21 January 2022.

If it’s not a new install I’d release-upgrade asap and look at the issue there as you’ll be using a new kernel stack, thus new kernel modules (aka drivers). I wouldn’t spend a lot of time/energy trying to fix something that is in it’s last week of life/support (though it’s your choice).

no change after update.